Jody Fisher has a new album out of solo guitar, called "Wistful Thinking," this time entirely of original compositions. There are extensive samples here.

At $15 each for his most recent two albums, it's quite a bargain -- I think Jody is one of the best solo jazz guitarists out there. He manages to bring a whole host of influences together (Joe Pass, Ted Greene, Lenny Breau, George Van Eps) to create a very musical, flowing presentation. As I've said before, I consider him the heir to Ted Greene, as far as this kind of playing is concerned. I've got to take the plunge at some point and get his solo guitar instruction books/CDs, "The Art of Solo Guitar."
Posted by Steven Rosenberg at 4:55 PM No comments: 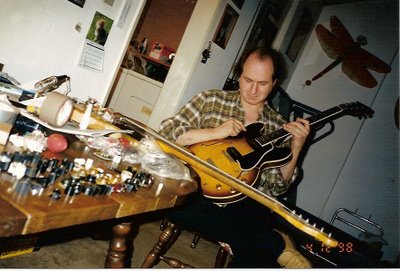 I followed a link to the Ted Greene memorial site, and it seems that due to a dispute between Ted's siblings and those who run the Web site (including Ted's girlfriend Barbara), the site has been taken down. Only forums remain, where it's pretty easy to follow what happened. Leon White (producer of the "Solo Guitar" LP) and others say lawsuits were threatened, and that led to suspension of the fast-growing compendium of Ted's lesson materials, recordings, etc.

If you go through the various parts of the forum, you'll stumble across gems like this. Blogger isn't cooperating when it comes to uploading photos, or I'd post one of the many on the forum here.
Posted by Steven Rosenberg at 4:47 PM 2 comments: 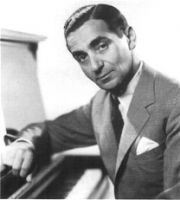 I knew that Irving Berlin couldn't read or write music, but can't believe this from his Wikipedia entry:

In spite of his musical career, Berlin never learned how to play a piano or read music beyond a rudimentary level. He reportedly was unable to compose in any key other than F-sharp major (or, presumably, D-sharp minor, since he also wrote songs in minor keys) and owned a special piano that mechanically transposed keys while an assistant wrote out the music scores.

He could only play in one key? Since a lot of show tunes modulate like crazy, how did he handle that? Did the "special piano" transpose on the fly somehow?

A Transposing piano is a special piano which can be adjusted by the player (e.g. with a lever or pedal) to transpose. There are not many in existence, but they have been used, for example, by people whose skills are restricted to playing in certain keys, or by those who need to transpose music, but lack the necessary skill in so doing.