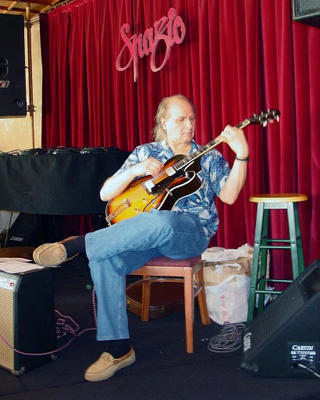 Photo courtesy of Nick Stasinos, who was at the July 25 gig as well as the Dec. 12, 2004, performance pictured above.

The legendary Ted Greene -- one of the few to whom the word "legendary" really applies -- was found dead July 25, 2005, in his Encino, Calif., apartment. He was 58. Right now, the cause of death has not yet been determined, but suspicion is that it was a heart attack. I bought all of Ted's books and his only album way back when I was a young player, and there's just about a lifetime's worth of material in those four books alone.

A busy teacher for decades, Ted rarely performed, and while he recorded a couple of tracks each on two John Pisano albums, his "Solo Guitar" LP, long out of print but finally re-released on CD by Art of Life Records last year, provides a very complete picture of what Ted Greene, the player, was all about.

In 2004, Ted began playing Sunday brunch about once every other month at Spazio in Sherman Oaks. I was lucky enough to attend one of those performances and review it for Just Jazz Guitar magazine. It's a bit eerie that it was exactly a year before his death. Here is that review:

You don’t see Ted Greene every day. In fact, the elusive solo guitarist hardly ever gigs at all, and you can probably count on the fingers of one hand the number of times he has done so in the last decade.

But the busy educator and well-known author of “Chord Chemistry” and other now-classic instruction books mesmerized the Sunday brunch crowd at Spazio in Sherman Oaks, Calif., with three sets on July 25 (2004) that showed how a lone jazz guitarist can indeed deliver every bit as much musical nuance and emotion as the finest piano players.

Hunched over his signature Fender Telecaster, equipped with a neck humbucker, Greene’s playing is all about great songs with strong emphasis on melody, seemingly impossible chords and heartfelt delivery. From Cole Porter’s “Anything Goes,” through a wonderful “West Side Story” medley and even a soulful rendition of the Beatles’ “Hey Jude,” Greene has lost nothing in the decades since his long-out-of-print “Solo Guitar” album raised the bar upon its release in 1977.

For those who haven’t heard “Solo Guitar” or his tracks on John Pisano’s “Among Friends” and “Conversation Pieces” CDs, Ted Greene’s sensitive, harmonically rich approach to music and the guitar leans heavily on the pioneering chord-melody work of George Van Eps and the artificial harmonics of Lenny Breau. The other thing to remember about Ted is that he’s in love with the songs he plays, and his renditions can teach us to love them, too.

At Spazio, Ted’s clean and clear sound (amplified by a Fender Vibrolux Reverb and a very sensitive house PA) was just like it is on record, almost acoustic at times. He had a older Guild archtop on the stage but didn’t use it.

I couldn’t determine the extent to which Ted’s arrangements of the tunes were worked out beforehand or created on the spot, but there was a lot more harmonic experimentation on the Spazio stage than I remember from the “Solo Guitar” album (one of my chief reasons for keeping a turntable hooked up). Hearing the way Ted expanded the harmony of “Hey Jude” made me want to grab his “Modern Chord Progressions” book and start working on his extremely fluid (but often hard-to-finger) ideas.
Posted by Steven Rosenberg at 10:42 AM 2 comments: