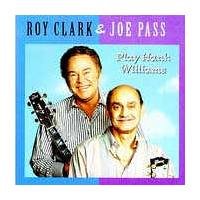 Google has an hour-long video of Joe Pass and Roy Clark playing together in the studio. I could watch Joe play rhythm all day.

I haven't had the chance to watch the whole thing, but it's a documentary with interviews of both players. Just like Joe said, I always liked Roy's playing -- it was hard to miss him on "Hee Haw" in the '70s and '80s. A very good player, as are many in the country field.

I remember reading somewhere that this was Joe's last session before his death in 1994. If so, it's a nice way to go out -- some very good music here.

Gear notes: Roy is playing a Heritage thin-bodied guitar, probably built custom for him. Joe is playing the special ES-175 that Gibson made for him in the years before his death. It has a slightly thinner body, a rosewood bridge, trapeze tailpiece and only one pickup, which is mounted flush with the neck like on an L4 CES (closer than a tradional 175), and the original Kluson tuners (not replacement Grovers).

Found via the Joe Pass Memorial Hall, where all things Joe can be learned.
Posted by Steven Rosenberg at 1:23 PM 3 comments:

It takes GIANT STONES to trade eights with OP 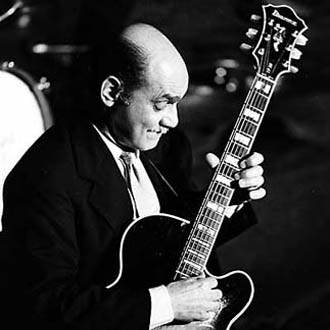 Check out this YouTube.com video of Joe Pass playing with Oscar Peterson. NHOP on bass.

Joe is standing up, playing the Ibanez, and cooking like crazy, which is what you pretty much had to do to keep up with Oscar Peterson.

Joe plays the head of "The Cakewalk" in unison with Peterson -- and check out the section when piano and guitar trade eight-bar phrases.

Another example of Joe Pass, the complete player -- masterful rhythm guitarist, ensemble player and soloist.
Posted by Steven Rosenberg at 12:15 PM No comments:

For my 40th birthday, (yep, I'm 40 -- FORTY), Ilene got me a video iPod, so I downloaded the John Stowell video podcast from Portland Jazz Jams.

I haven't had a chance to really watch it, but first impressions are that the video and audio are both excellent. They could sell this thing for $24.95 through Mel Bay, and it would hold up very well.

John is playing his Doolin nylon string in front of a black background, and the performance was captured by two cameras -- there are plenty of close-ups of his hands (watching his left hand is a master class in itself), and a few "dissolves" with the views of two cameras at once.

Sound is great. Probably the best thing is that he is playing the nylon string and not an electric with a bunch of effects, which make some of his earlier recordings less than ideal.

I'll have to spend some time watching the whole thing, but this is a definite must for those who love solo jazz guitar. John Stowell is truly an original player who shouldn't be missed, and he does, in fact, sound better than ever.
Posted by Steven Rosenberg at 12:14 PM No comments: